Art Fit For A President

“I Think I’ll …”, Ed Ruscha, 1983 Ruscha is famous for his series of witty word paintings, like this one about decision and indecision. On loan during Obama’s White House

Tomorrow is moving day for the Presidents. How much control does a President have over art in the White House you ask? According to Slate.com: “For both public and private spaces, the president’s family can sort through first-rate spoils instead of relying on shopping trips. There’s a White House storage house with old furniture (like four-poster beds) and an art collection with about 500 sculptures, drawings, and paintings (including works by Norman Rockwell and Georgia O’Keeffe) obtained as gifts or by previous first families and the White House curator. Traditionally, presidents select portraits of their favorite predecessors to line the walls.” There is also a tradition of commissioning portraits of the presidents and first ladies. 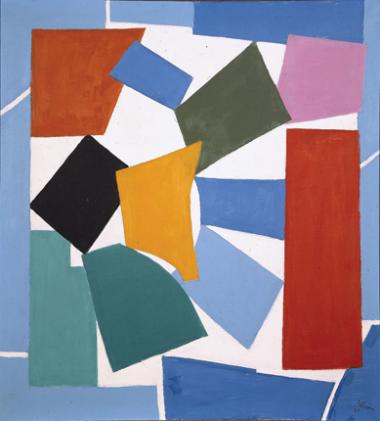 Watusi (Hard Edge), Alma Thomas, 1963 An African American, Thomas was a longtime resident of Washington. A work inspired by one of the cut-paper collages of Henri Matisse, Watusi previously hung in the East Wing office of Michelle Obama.

According to The Wall Street Journal, “the Obamas borrowed art from the Hirshhorn Museum and Sculpture Garden and The National Gallery of Art including “Sky Light” and “Watusi (Hard Edge),” a pair of blue and yellow abstracts by lesser-known African-American abstract artist Alma Thomas, acclaimed for her post-war paintings of geometric shapes in cheery colors. The National Gallery of Art loaned the family at least five works, including “Numerals, 0 through 9,” a lead relief sculpture by Jasper Johns, “Berkeley No. 52,” a splashy large-scale painting by Richard Diebenkorn, and a blood-red Edward Ruscha. The Jasper Johns sculpture was installed in the residence on Inauguration Day, along with modern works by Robert Rauschenberg and Louise Nevelson, also on loan from the National Gallery.”

Berkeley No. 52, Richard Diebenkorn, 1955 One of the best-known West Coast abstractionists, Diebenkorn made paintings that evoked the light and landscape of the Pacific coast.

We’ll have to keep our eyes and ears open to find out what artwork will be on loan during the new administration. Collectors say the art selected by presidents for installation in the White House likely affect the artists’ market values — or at least raise their profiles.